On the 19th June 2020, Dan Tehan – Minister for Education, announced a proposed new funding model for Australian Universities.  The objective of the change is to shift student attention to jobs of national importance, such as teaching, nursing and STEM fields, and to support regional Australia, while also better aligning funding with the average cost of delivery.  This potentially poses an inherent problem right from the beginning as the actual cost of delivery may vary widely from institution to institution.

Let’s start with our baseline model again, this is the pre-covid 2020 forecast where the institution was projecting a $29 million margin for the year. The worst-case scenario modelled with a large drop in international students, drop in commercial revenue due to campuses being closed and additional expenses for international student support and IT expenses for moving courses online, resulted in a projected loss of $41 million.

With the proposed funding changes recently announced, including the grandfathering of certain rates, and institutions not knowing what is going to happen in the short to medium term, we are going to wind the clock forward five years to a time where we hope the coronavirus is gone or well under control, there are no longer any grandfathered rates, and hopefully international students are back up to 2020 forecasts. In other words, what would ‘situation normal’ look like in five year’s time?[1]

The first thing we need to do is create some new funding clusters and to update the CGS and Student Contribution rates proposed by the Education Department.

The clusters highlighted in yellow are new and will be added to the model. Overall funding per cluster varies with an aggregate change in the negative; it really depends on student numbers and mix across education fields for individual institutions to determine if the overall change for the entire institution is positive or negative.

For the demonstration model, we’ll set the year to 2025 using the new proposed fees but we will keep the student numbers and staff numbers exactly the same as in the pre-COVID baseline situation for easy comparison. The only change will be annual inflation on both revenues and expenses, and the agreed annual enterprise bargaining increases. 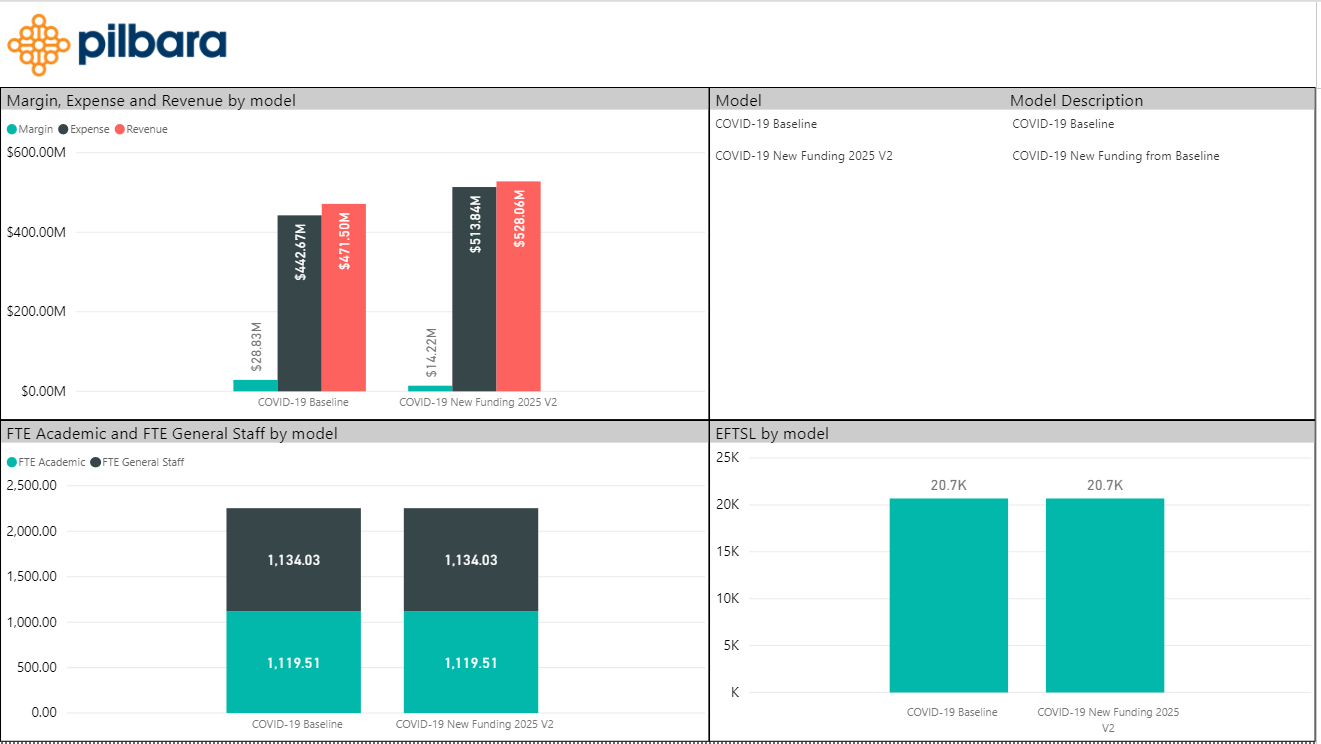 As can be seen in the above screenshot, the student numbers (EFTSL) and staff numbers (FTE) remain the same and the overall expenses and revenue have gone up due to inflation and EB agreements. With the new funding this produces a decrease in margin from $29 million to $14 million, so quite a significant drop of $15 million just by adjusting student fees and CSP income.

The Government has said that as part of the new funding they will be increasing the number of places available for CGS students each year up to 2030. For our scenario we will estimate that an additional 1000 places will be available for 2025 and we’ll distribute these new places to the areas of national interest, initially, to see what the impact will be financially. For the demonstration model this means education (teaching) and nursing. 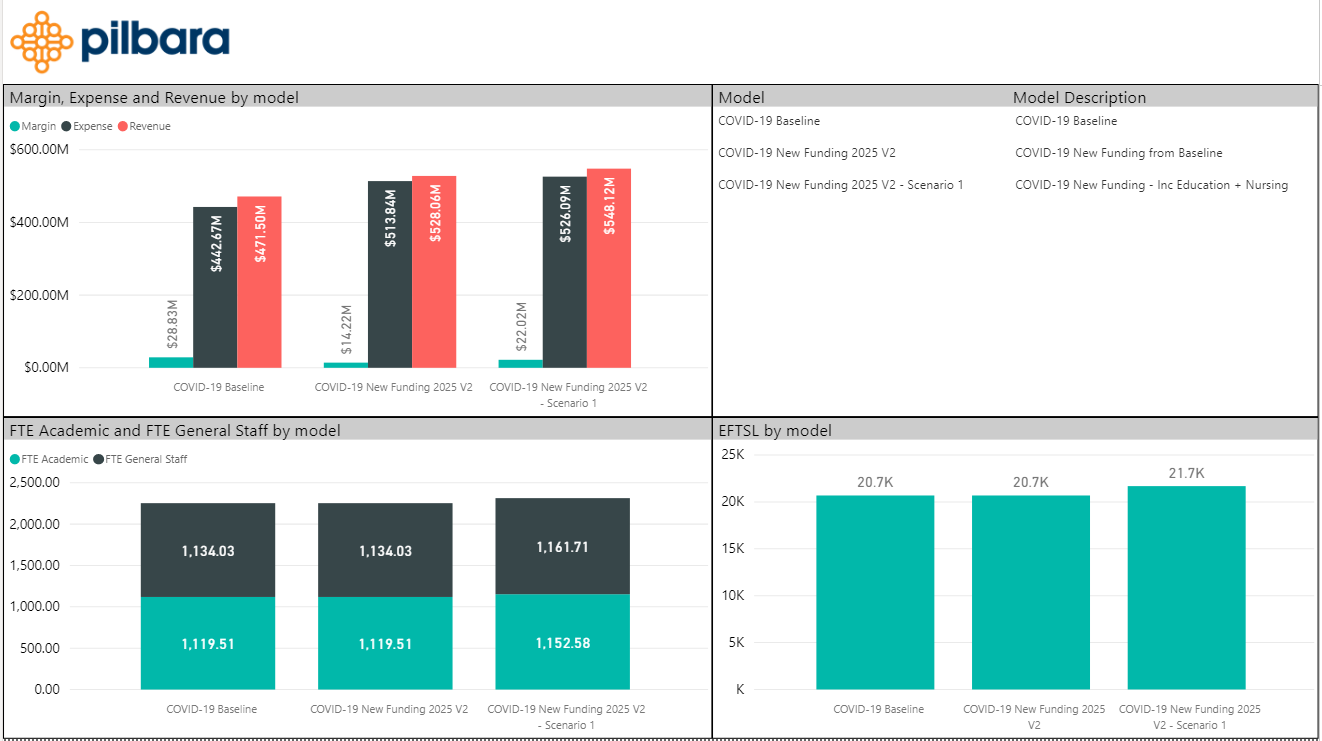 This increases the overall margin from $14 million to $22 million, getting closer to the original baseline but the institution is still $7 million worse off under the new fee structure and increased student numbers in those areas of national interest.

However, drilling into the details of this new funding model has highlighted an area of concern for the university.

The overall margin for the School of Environmental Sciences has dropped from $6.34 million to $2.95 million.

Which is not really a surprise since we have seen that the combined funding for Environment Studies would drop by $9,944.

According to the discussion paper released by the Department of Education funding provided for Environmental Studies has moved from being over-funded to slightly under-funded, as shown below. 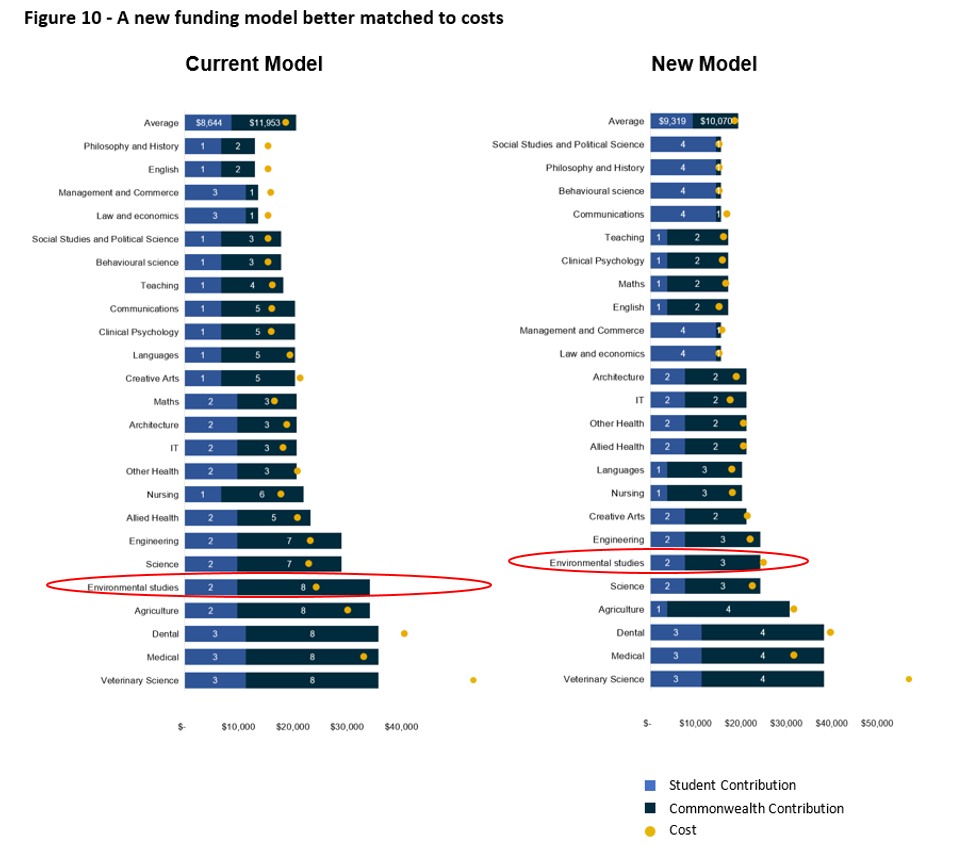 Unfortunately, this “cost of delivery” is based on averages, so, by definition, some institutions will be higher than the average and some will be lower. This is why it’s very important to know your institution’s actual full-cost of delivery, to see what the financial impact of funding changes will be and then determine any mitigating actions that can be taken.

This is where we start getting into the complex web of programs/course relationships with double-degrees and electives.

For this particular example the institution has a double degree BACH006: Bachelor of Arts (Education) / Bachelor of Science, which includes a number of Environmental Science subjects. 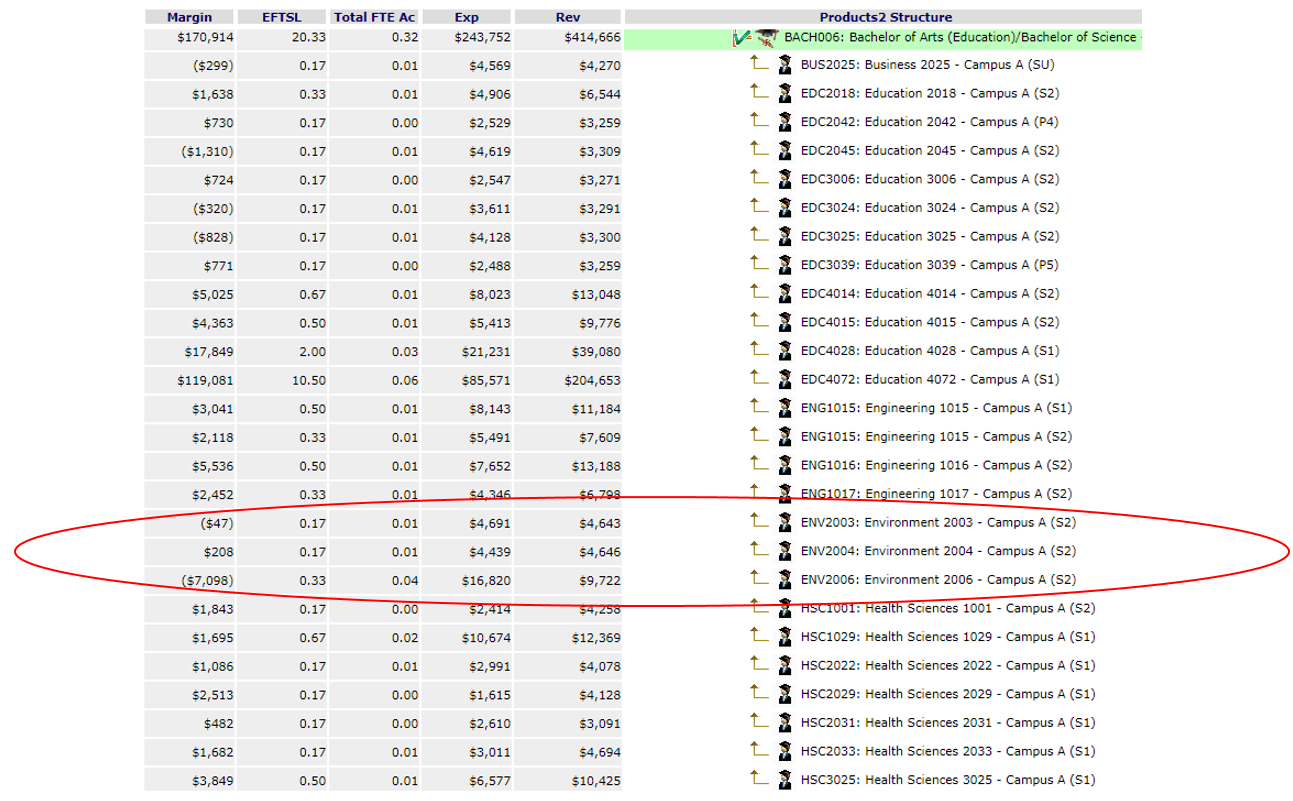 Therefore, an increase in students studying Education (Teaching) results in an increase in students taking Environmental Science subjects, which results in an increase in expense to teach these extra students, but now with less revenue per student. The overall financial position of the School of Environmental Science is worse under the new funding plan.  This is not necessarily bad since the real enemy in this situation is the “hidden” cost. However, by knowing how much more it costs to teach these students the institution can plan its student load distribution accordingly.

So what could the institution do? Frank Larkins and Ian Marshman posed an interesting scenario in their Campus Morning Mail article https://campusmorningmail.com.au/news/job-ready-graduates-bring-in-the-academic-planners/

By examining the change in funding in detail they discovered they could swap one engineering student for 15 humanities students to provide an overall better financial position for the institution. Again, it’s vitally important to understand your institution’s specific cost to teach each education area before you can start exploring these options. It is not advisable to use the Deloitte average costs of teaching for this type of future planning.

It should be noted that the Department has already indicated that they will be looking out for any radical change in student mix, so we are not recommending this approach, simply modelling it to see what the impact could be.

Let’s explore what would happen in our model by dropping the number of engineering students and increasing the number of humanities students whilst also ensuring we remain at or under the expected number of new places offered by the Government, in this example 1000. 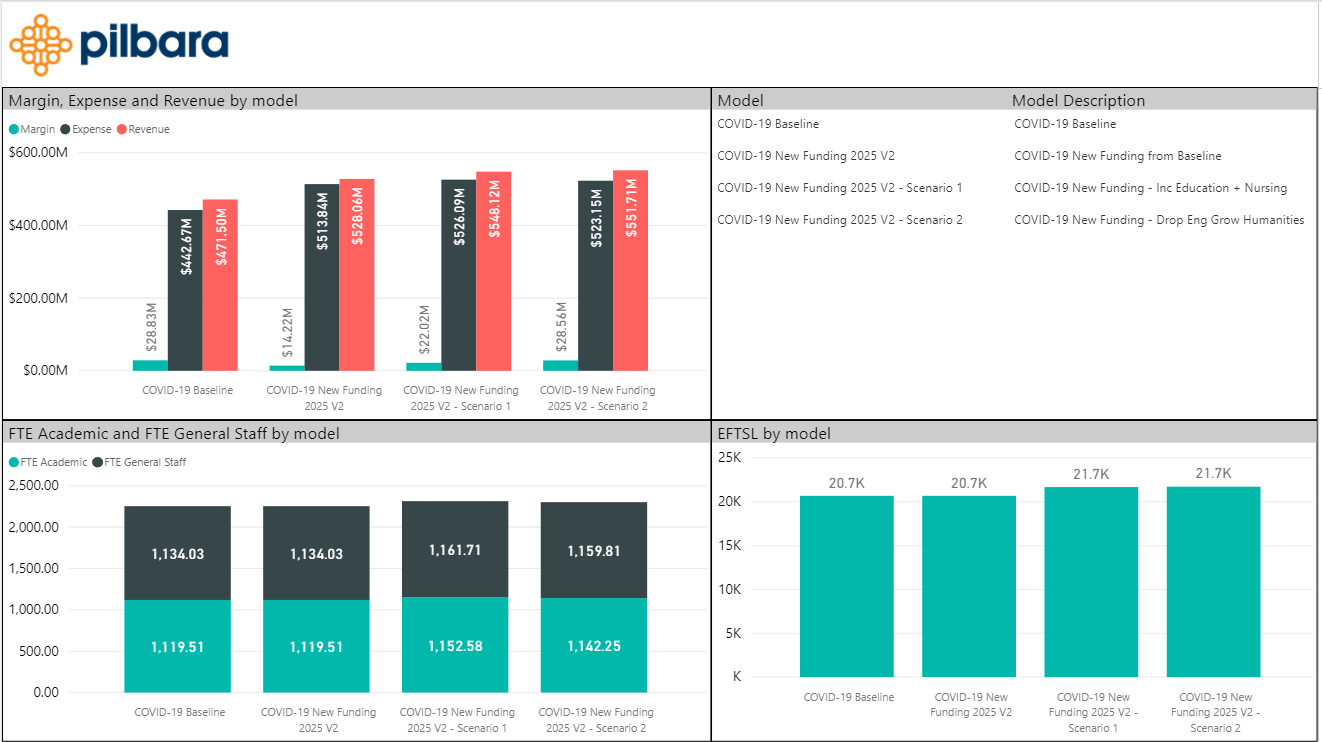 As predicted by the Larkins-Marshman article, this improves the overall financial position of the institution, almost back to the baseline margin. It should be noted that Scenario 1 and Scenario 2 are discrete options the institution could explore for comparison purposes, they are not sequential scenarios.

In this next scenario we’ll explore an option that a number of institutions are currently exploring, that is, delaying the Enterprise Bargaining salary increase for 2021. Even though we are modelling the year 2025 the change in 2021 will have a flow on impact for several years. 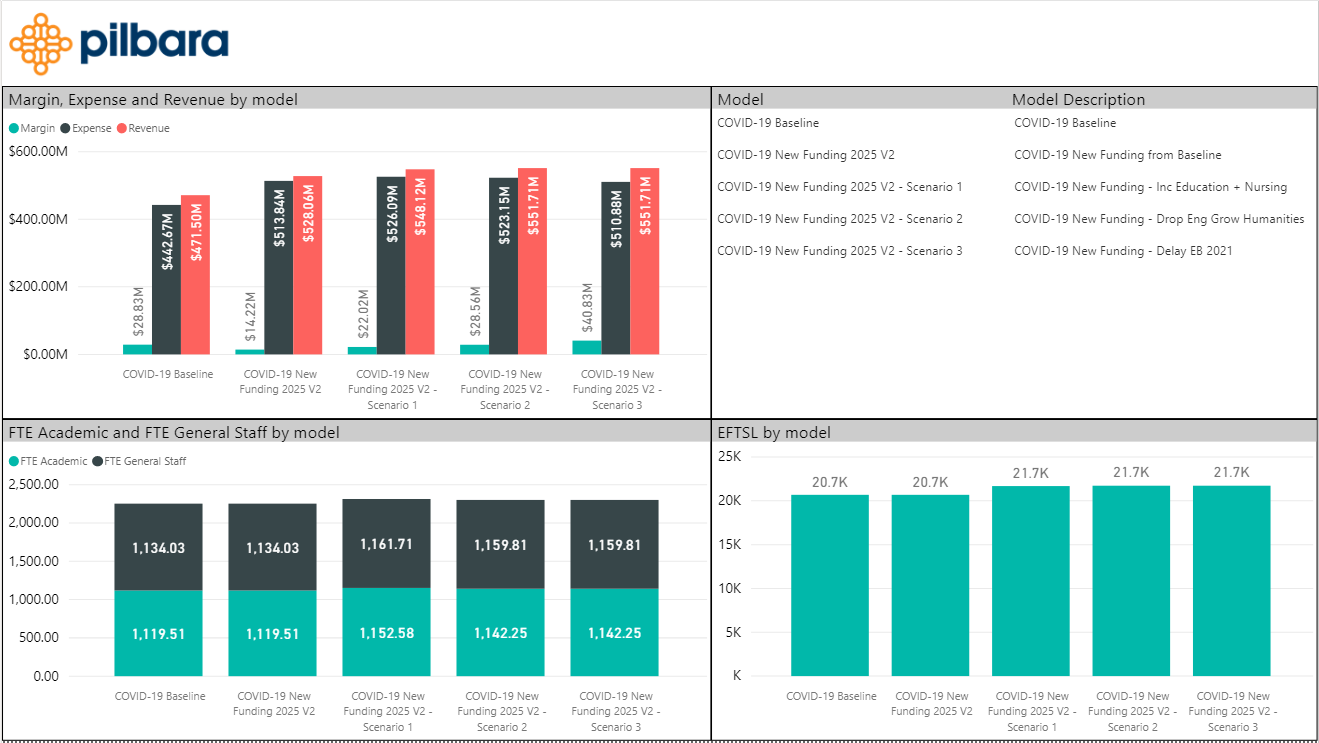 As shown above the change in salary costs has quite a dramatic impact by increasing the overall institution margin by about $11 million from $29 million to around $40 million.  This would significantly assist the institution in 2021 to deal with the immediate financial impact of COVID-19.

These scenarios have assumed international student numbers are back at current levels, however this may not be the case as we have no idea what the impact on international students will be at this point in 2020.  As more data comes to light over coming weeks and months, scenarios can be updated in the model (or new ones created) to determine the overall impact and plan accordingly. The major benefit of running these scenarios for time frames for five to ten years in the future is that staff numbers can be managed in a more controlled fashion. For example, by knowing that certain areas may suffer financial stress later than others may allow the institution to use natural attrition to their advantage rather than having to undertake voluntary / involuntary redundancies.

Finally, to wrap us this series of scenarios, we will look at a current discussion going on in the social media world, that is, whether changes in fees will influence student choices. Historically there has been no relationship between price changes and student choices, however we are living in new and interesting times, so could it be different now? We can test it in the model anyway, just to see what the impact would be.

This means that the following areas could suffer a decrease in students since the student contribution has increased.

And these areas could experience an increase in students because the Student Contribution is less. 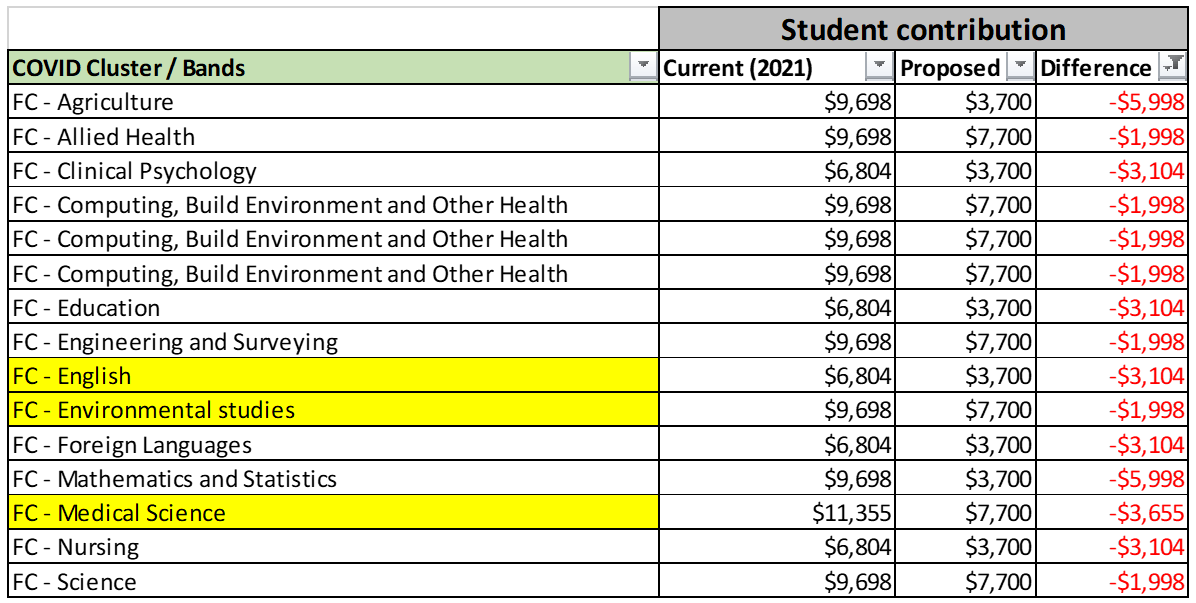 In the model we’ll select a number of Communications, Humanities and Social Studies programs and decrease the number of students by 300 EFTSL and increase Education, Mathematics and Statistics, Medical Science and Nursing students by 1,300 EFTSL to reach the new cap available. 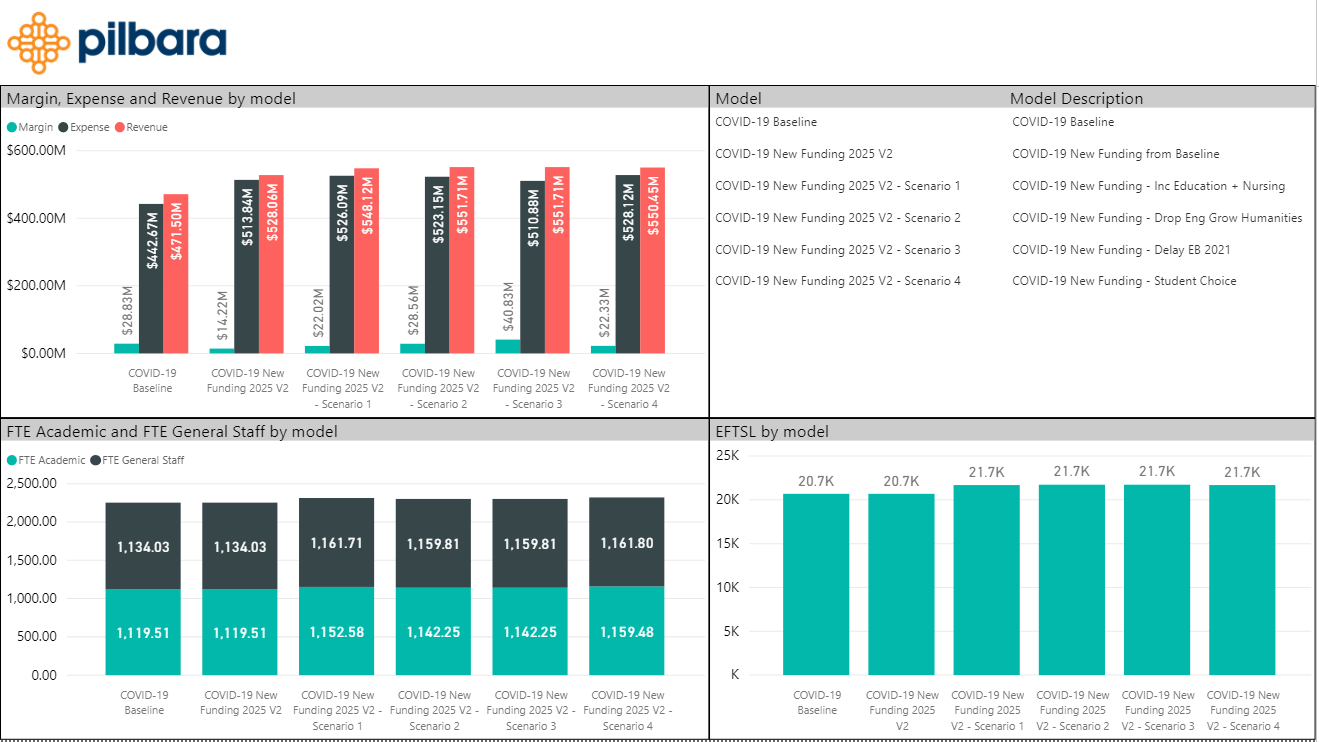 The results are shown above as Scenario 4 – not that different to Scenario 1 where we simply increase Education and Nursing.  Luckily, in our model all areas that were increased all had positive margins initially, so any growth contributes positively to the overall margin of the institution.

It is very easy to run different scenarios with different mixes and numbers of students. The tricky part is knowing what the mix and numbers are going to be.  This is why it is very important to have a pre-built model that can be used to run a wide-range of scenarios as more information comes to hand so you can determine the overall financial impact quickly. Furthermore, if the university decides to make a strategic decision to market a specific program to certain students to take advantage of the new funding model, then this can be tested in advance to ensure that if they do hit their student number targets then it will be financially beneficial.

[1] We know this is getting a bit ahead of ourselves, and we will return to ‘situation abnormal’ in the prolonged Covid-19 environment in a future blog. The intention here is to keep things simple relative to what we understood was normal before Covid-19. In future, we will merge the combined impacts of Covid-19 and Commonwealth funding changes on our university’s finances and staffing in the immediate to medium term.

Previous Previous post: Turn Away or Enrol? It’s not that simple!
Next Next post: Academic Burnout – Can you measure or predict it?

Join the discussion and tell us your opinion.